News and How to Block an Attack


We’ve been plugging away on bestiaries behind the scenes, but major developments in Real Life (TM) (e.g. 3 months building work on Slev's house) has put us behind schedule.

In the meantime, I’ve been asked about how “block” works. There’s two sides to this, where you get block from, and how to use it.

Using Block
When you use a Block, you reduce all damage from one hit to zero. Just one. Not all of them for one turn, like with a Fate Point. Just the one.

This is useful if there is only one enemy who can attack you, or if every other enemy has already failed to hurt you, since they allow you to preserve your precious Fate Points for other eventualities.

Gaining Block
Block can come from several sources. Here’s the rub, each source can only give you Block once.

Some items grant Block, such as a Lucky Charm. Once that Block has been used, it’s gone for the rest of the Expedition, even if you hand the item to someone else.

Where this gets complicated is where these two rules come together.

Let’s say you have “Block with Chainmail”, and have found a suit of magical chainmail that grants you Block itself. This gives you two Blocks. And if you don’t remove said Chainmail for the entire Expedition, there is no further complication beyond that.

However, if we get to the point where you change and swap armour and other such, things can be complicated. In the above example, the Chainmail is supplying two points of Block. If I use one point of Block from it, and then pass it to another Hero, you chose retroactively how you spent it. You basically have to decide then if you gained the point you used from “Block with Chainmail” or from “this Chainmail has Block”. If the latter, the other person cannot use that ability this expedition.

This may seem like it is open to abuse, but in practice, the player will spend time agonising over the order of spending Block points only when these edge cases occur.
Posted by Unknown at 12:41 No comments:

Casting the Scroll of Updating

Today we uploaded the play-test version of another classic Quest: The Eyes of Chaos.

Over the last month we've had a few updates. There's very little changed in the actual rules, but this should make things clearer.

Appendix V
Random Events table:various point clarified, some others adjusted for ballence and/or to ensure they're always relevent.

Appendix X
Clarified Luck.
Posted by Unknown at 06:25 No comments:

The Winds of Magic 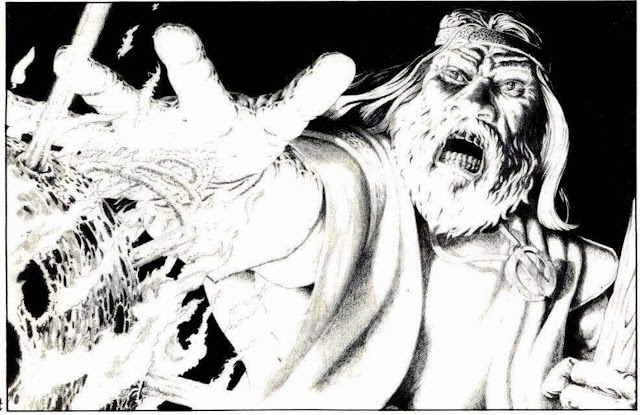 Today I’m going to talk about Mystic Powers; that is, Spells and Prayers. A few people have asked about this.

Mechanically, Spells work almost identically to the original game. With a few minor caveats and clean-ups for edge cases, we then added Abilities to grant a range of casting techniques.

The original material gave us details for four of the eight Colleges of Magic. Unfortunately, they were all very different mechanically, from the number of different Spell Components they used, to the number of Spells available. I thus first added additional Spells to take them up to twelve per college. I then adjusted the Spell Components to mirror the distributions from the Bright College. This then left me needing to create another four Colleges, which were heavily inspired by the Warhammer background.

However, it turned out that, even with them costing less to learn, opportunity cost left a lot of the more marginal spells ignored by the players. They were just found to be not worthwhile.  I thus embarked on a MAJOR re-writing of the Spells, to make every Cantrip roughly equal with the others, and likewise every Ritual was made to be broadly equal. This had the added bonus that each type of Spell could then have the same cost to learn, leaving less clutter on the Spell Books.

The four different magic specialisation paths (Conjurer, Enchanter, Mage, & Sorcerer) allowed us to give variations on HOW magic was cast. They took some balancing. The power enhancements of the Mage where found to be too narrow, and where widened. The Enchanter’s pre-cast spells where made slightly cheaper, but he lost the “Wisdom” ability and +1 Int modifier, hence giving a greater focus on the pre-cast spells. The extra casts available to the Sorcerer originally had a risk attached, but this was removed.

The hardest to balance was the Conjurer. Removing “Wisdom” and the +1 Int modifier certainly helped, and Channelling’s penalty on healing Spells did likewise. However, the increase in Fame (to offset the reduced costs of adventuring) and Experience (to offset the extra castings available) really brought the path to balance.

Priests where my next port of call. It was decided that the power of a Blessing should be slightly less than that of a Cantrip Spell, and a Litany should be less powerful still. Like the Spells, Prayers were made to all have similar power levels by type. The two variant priest types (Cleric and Chaplain) gave some nice variety as to how Priests could work.

Putting Faith Points into place to power the Spells made the Priest subtly different from the Wizard. However, it did mean that we had to come up with a way for a Priest to increase the number of Faith available. This proved problematic to balance with just money and Experience. It was then I realised that the Priest’s powers having a fixed number of uses was akin to the Enchanter’s pre-casting abilities, and thus we changed the Experience costs of some Priest advances to be Fame costs instead. This forms a nice balance as the Priest must pay for their powers regardless of if they are used, but always has a free choice of how to use them. The Fame cost prevents the Priest from advancing too fast, since they will bankrupt themselves otherwise.